How to configure a FreeBSD Jail with vnet and ZFS

You show tun interface but no where do you explain anything about it. Where did it come from? How did it get ip addresses. Please explain.

You show tun interface but no where do you explain anything about it. Where did it come from? How did it get ip addresses. Please explain.

tun0 is my openvpn interface running inside jail. I should update the page to avoid confusion.

It’s time to redo this article. FreeBSD RELEASE-12.0 was published yesterday 12/10/2018. Vimage now comes built into the base kernel and ipfw and pf firewalls are now vnet aware. IPFW still has problem with its log intermingling vnet jail log records with the hosts log records in the security log file. Netgraph is a bad example as its so complicated to use. bridge/epair is the method most commonly used and is a far better example. The jib jng scripts are examples them selves and have their own problems. Should not base your example on them.

Would like to see your sample use ufs instead of zfs. IE: fetch the base.txz file and unpack it for a full directory tree vnet jail. Use a jail.conf that includes the ifconfig commands to create the bridge and epair instead of burying then in the vnet jails rc.conf. You can use ifconfig commands to rename the bridge to include the host interface name facing the public internet and rename the epair to include the jail name like jib does. Use the pf firewall in a vnet jail running on a gateway host so NAT is required. Explain how public traffic is driven to the vnet jail. pf can be loaded as a module now so don’t have to run pf on the host as a requirement.

During my research I posted replies to the articles and you are the first one to ever reply. That means your site is maintained and has interest to keep up with changing times. I thank you for that.

I think this would really be helpful as it’s never been documented before.

Thank you for considering this request.

Yes, I am waiting for FreeBSD 12 host here. Mostly I will run on AWS and VM at AWS come default with UFS and directly connected to the Internet. I will write a new post covering that.

I have some errors here, seems my config file doesn’t work?

Make sure you run ALL command as root user. It seems command ngctl not found. Can you see ngctl?

Yes, it run as root, ngctl was located at /usr/sbin.

@yhq_34, Do you have em0 interface on FreeBSD server? Can you paste your /etc/jail.conf from the server host?

yes, same with your config.

Seems correct config. Are you using FreeBSD 11.x? What does /jails/freebsd1/etc/rc.conf says?

Please format your command and output with Markdown. See https://commonmark.org/help/

I have upgrade to 12.0 version. /jails/freebsd1/etc/rc.conf was same with you written.
No .log file at /var/log/ folder.

This tutorial created for FreeBSD 11.x. So it won’t work on FreeBSD 12. There are some changes.

Do you plan to update the tutorial to suitable with FreeBSD 12?

I am planning to write a new one as there are many changes between 11 and 12 version. Stay tuned.

Hello Vivek Gite;
Been trying to get vnet jails to work on a gateway host. Having problems with vnet network access to the public internet. I need some help. From this article I can tell you have the networking knowledge that can help me figure out what is wrong with my vnet configuration. I wrote my problem as a draft for an article that you may use to post on this site. I can be reached at joeb_722 at yahoo dot com

This is an example of a vnet jail configuration that is run on a real hardware computer having a network interface connected to a public internet service provider. FreeBSD 12.0 is the operating system running on this hardware.

VIMAGE which is required for vnet jails is included in the FreeBSD base kernel in this release, and the PF firewall and its NAT (network address translation) function have also been adapted to be vnet jail aware. A vnet jail requires NAT to access the public internet.

Information on the sysrc command and the "service jail" command.

$ sysrc jail_list=""
Used by the "service jail" command. Empty list means all jails are in a single /etc/jail.conf file.

This "service jail" command setup works for both vnet jails and non-vnets.

Repeat the following 2 commands changing the jail-name to create as many vnet jails as you want.

Preparing the host’s /etc/rc.conf for jails.

Substitute all 4 places where the word jail-name is shown with the real jail name created above.
Vnet jails must have an ip address assigned to it. Change the ip address 10.0.110.25/24 to what ever ip address you’re using on your host system leaving the /24 suffix.

Setup PF firewall to run inside of vnet jail.

Copy the following and paste it into the /etc/rc.conf file of the vnet jail you’re setting up.

On the host create /etc/devfs.rules file and populate it with the following content. Then issue the "service devfs restart" command to enable this new rule.

This only needs to be done one time.

devfsrules for pf to function in a vnet jail.

Copy the following and paste it into the /etc/pf.conf file of the vnet jail you’re setting up. This is very simple PF rules, pass every thing in and out and log, so traffic can be viewed.

PF is now a loadable module. If PF is used as the hosts firewall than nothing further needs to be done. If the host is running IPFW or IPFILTER firewall then PF has to be loaded into the kernel one time per boot using this command "kldload pf.ko pflog.ko" or added to boot/loader.conf. To see what modules have been loaded issue kldstat -v. To unload the PF modules
use "kldunload -f pf.ko pflog.ko" command.

It may take up to 30 seconds for the vnet jail to complete starting.
You can issue the "jls" command to verify the jail is running.
To log into the running jail issue "jexec jail-name login -f root"

I had a typo, tried to start the jail and if failed. I corrected the typo but the bridge0 was already there, so the jails didn’t start. I manually ran ‘ifconfig bridge 0 destory’ and the jail started up find with ‘service jail start’.

Is there a way I can look into this on my own, your blog post is about the only thing I’ve found on the subject 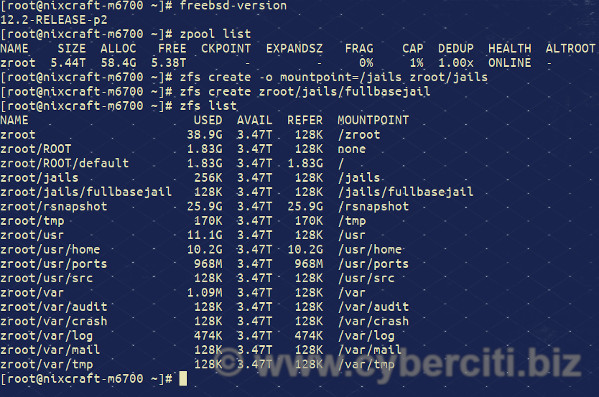 How to set up FreeBSD 12 VNET jail with ZFS - nixCraft

Explains how to set up and configure FreeBSD 12 VNET jail with ZFS to run various Internet-facing services securely on your Unix server.