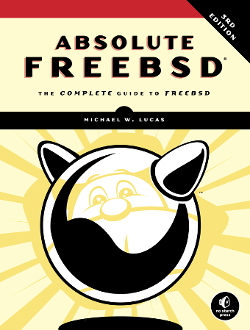 FreeBSD is a free and open source operating system for many different kinds of computers. FreeBSD’s based upon BSD, the version of UNIX developed at the University of California, Berkeley. FreeBSD is an alternative to Linux or Windows-based system. You can run almost all apps written in Perl, Python, PHP and other programming languages. FreeBSD heavily used by Netflix, EMC, IBM, Juniper, NetApp, Apple, Sony, and others. Absolute FreeBSD (3rd ed) book aims to be the complete guide to FreeBSD. Let us see why Michael W. Lucas’ FreeBSD system administration books so favorite among Unix lovers.

FreeBSD is a Linux Distribution that I would like to test, currently I work with Ubuntu Distribution. Linux is an operating system that I promote for all computer users because it works efficiently away from errors or bugs. Moreover, Linux is development oriented before to be a plateform where we sell and buy. I work with Ubuntu since 2009 which is the first time I knew Open Source and Free Software. A lot of Operating Systems are rising now, I wonder which one will be the most used. Teaching how to work with a microprocessor is the first step for a good Operating System. I hope with FreeBSD we can learn more about microprocessor, I know FreeBSD is famous to be a work of University of California in Berkeley. I wish to have all engineers working together for better kernel. I need to see my favorite movie!